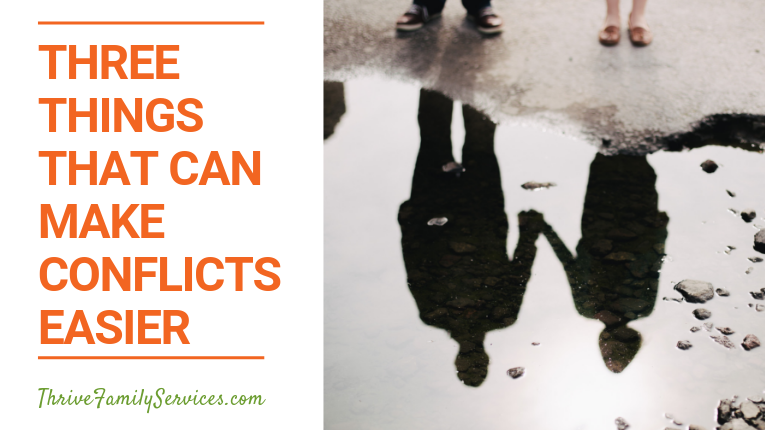 Conflict is a part of every relationship in the world. Parents and children have conflicts. Friendships have conflict. Even employers and co-workers experience conflict. Usually, the conflicts that impact us the most are the ones we have with our significant other. Whether you fully engage in conflict in your relationships or you keep the feelings inside of you, it exists.

In a romantic relationship, the point of conflict should be to improve your relationship and yourselves as individuals. However, frequently members of a couple make winning the point of a conflict.

If winning becomes the reason why you are engaging in a conflict with your partner, then the conflict needs to end. It will inevitably end up leaving partners feeling farther away from each other rather than closer together.

When a conflict is handled in a healthy way, it can actually bring a couple closer together!

To do this, partners need to make sure that they are using conflict to accurately express themselves – their feelings, wants, and needs. When these things are presented well and the other partner attempts to listen and make changes, conflicts are an amazing part of the relationship.

Here are three things that you can do to make your conflicts easier and to ensure that they are helping your relationship instead of hurting it:

One fairly easy technique for having healthier conflict is to pay attention to the body language of your partner and yourself. In a healthy conflict, both partners’ bodies are engaged and equal.

Simply put, make sure that your body and your partner’s body are turned to each other and are portraying the same thing.

For example, if you remember to watch to see if you or your partner is showing body language that is disengaging (such as cowering or hiding their face), it may be time to take a time out from the conflict. Body language is a direct reflection of what’s going on inside of someone. If they appear to be shutting you out, you are probably coming off too strong. They are trying to protect themselves by closing themselves off physically.

Similarly, if you or your partner is angry or feeling big, loud emotions, their body will reflect that. They might be towering over the other person or be overly expressive or loud. This is also a good indication that it is probably time to take a time out.

The best body language for healthy conflict shows that you are relaxed and open.

Get comfortable. Turn towards each other or cuddle up together, if you feel safe doing so. Just make sure no one feels like they need to be closed off or hidden. Having this safe, warm body language shows your partner that you are ready to figure out the issue from the same team. You are not out to get each other or try to find a winner and loser of the argument. Maintaining eye contact and engaging in the conversation with an even tone is a great way to do that.

This doesn’t mean that you can’t show emotion in a conflict.

After all, there are going to be conflicts where someone is feeling angry, sad, or other strong emotions. Just be on the look out that emotions aren’t getting in the way of connection.

On a similar note, pay attention to your inner body to know if you need a break from the conflict. If you notice your heart rate rising, try to calm down by taking deep breaths or asking your partner to help you feel calmer and safer. It can be even better for your relationship if you and your partner learn how to soothe each other!

Here are some questions to talk about with your partner so you can understand each other’s signals and body language better during times of conflict:

Being defensive is one of the most common mistakes people make in conflict! When someone is defensive, they are essentially saying, “This is not my fault. This is your fault.”

When someone is presenting an issue to you, it matters to them. They want to feel listened to and understood. This doesn’t necessarily mean that you have to agree with your partner, but you should seek to understand their point-of-view. Defensiveness does just the opposite. It is a behavior intended to protect yourself and put blame on your partner.

When you feel the urge to defend yourself, try accepting responsibility for any part you might have played, instead.

Evan and Riley are coming home from a dinner with Riley’s family. During dinner, Riley pointed out that Evan has never worn the shirt that Riley’s parents bought for him a few years ago. Evan felt really embarrassed and was angry that Riley said that in front of his in-laws. In the car on the way home, he said, “I can’t believe that you made that comment about the shirt in front of your parents… When I told you I didn’t like the shirt, I thought you would know to keep that comment between us!”

Immediately, Riley responded, “I was just telling a joke to my parents! It’s just a shirt. Plus, they thought it was funny. You need to chill out.”

Riley’s comment was defensive because it was used to move the blame back to Evan. The comment completely disregarded Evan’s feelings and made Evan sound like the problem. See how that could easily roll into a fight to find a winner and a loser?

Now imagine that Riley knew to watch out for feelings of defensiveness, recognized those feelings, and chose to accept responsibility instead.

When Evan admitted that he felt embarrassed and angry at dinner, Riley could say, “Oh, Evan, I didn’t mean to make you feel bad. But now that you mention it, I can totally see how you would feel that way. I’m sorry I didn’t think of that sooner.”

Even though Riley might not agree that the joke was out of place, this response shows Evan that Riley does care about him. His feelings were validated and the conflict didn’t escalate into something bigger. Now, Riley knows more about Evan and can use that information to make improvements in their relationship.

3. Make Attempts to Repair the Conversation

This concept is not something that many people realize they should look out for, but it is something that everyone does! When a conflict gets too heated or takes a wrong turn, people often make an attempt to repair the situation. When our partner recognizes our attempts at repairing the conversation or when we recognize our partner’s attempts to repair it, our conflicts will be healthier.

Repair attempts are a great way to make a tough conversation easier to have, as long as they work!

Some examples of repair attempts include:

Repair attempts can come in many forms.

Remember: We all make mistakes in conflict, so it’s important to be able to recognize when you have messed up and apologize or correct yourself. Like any new skill, practice is the best way to make lasting changes.

These three things can be applied to any conflict in your life – not just with your significant other.

If you want to learn more about how to handle conflicts, schedule an appointment with our Denver Couples Counselors at 303-513-8975, X1, or schedule online today:Schedule Appointment