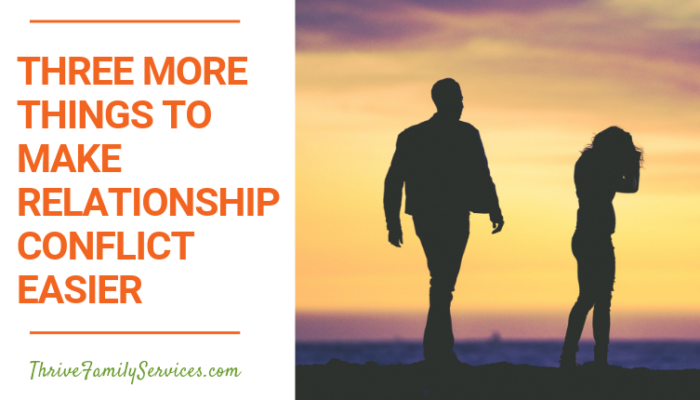 In the last blog, we discussed three techniques for making conflicts easier, healthier, and more successful. However, there are three more things that people can do to make their relationship conflicts better!

Did you know that the end of an argument can be predicted by how the first three minutes go? It’s true! If the beginning of an argument isn’t going well, it’s likely that it won’t end well, either.

Describe what is happening, but don’t make judgments

“It doesn’t look like you’re going to have time to mow the lawn today” is very different from “You didn’t get the lawn mowed today? You can’t even do the one thing I asked!”

It might be pretty obvious that if the beginning of a conflict sounds harsh, it is most likely going to get a harsh response. This pattern is just a set-up for a conflict to fail.

On the other hand, if partners are able to present a topic of conflict in a gentle way, it is more likely that the dialogue will remain calmer. One of the best ways to make sure that the beginning of the conflict sounds gentle is to simply describe what you see or what is happening, without evaluating or judging.

Let’s look at an example of relationship conflict:

Let’s say that Zoey asked Mandy to clean up dinner because she needed to call her mother. Zoey spends thirty minutes on the phone, and when she walks back into the kitchen, Mandy is sitting at the table playing games on her phone. None of the dishes have been touched.

Zoey might be tempted to say something like, “Mandy, are you really playing games right now? You said you would clean up, but you’ve just been sitting here this whole time!”

If she did, how do you think Mandy might respond to that statement? It’s probably not very likely that she would say, “Oh, you’re right. Silly me! How about I make it up to you by cleaning the dishes right now, and I will clean up the dishes for the rest of the week to make it up to you!”

It’s much more likely that she would reply with something defensive or blaming as a response to that. In order to keep this negative cycle from beginning, Zoey could try describing the event without evaluating or judging. This could sound something like, “The dishes are still here?” A phrase like this would give Mandy the opportunity to admit she made a mistake on her own, and it would be more likely that she would hop up and get cleaning, rather than engaging in an argument.

Be polite and appreciative

It’s hard for an argument to go south when the people in it are being polite and appreciative. This is why this guideline is important in determining the way a relationship conflict will go.

Using the same scenario with Zoey and Mandy, Mandy could practice this guideline by responding with some manners such as, “Oh, you’re right! I am so sorry. I let time slip by. Thanks for reminding me.” Likewise, Zoey could thank Mandy for getting the dishes clean whenever she starts, even though the action was delayed.

This is one of the most common mistakes that couples make. Often times, people think it is better for their relationship if they keep annoyances or anger to themselves. People do this with the intention of avoiding relationship conflict and negativity.

However, this action often ends up backfiring because emotions come out in different ways. One of the ways that this can backfire in conflict is when we pour out all of the things we’ve stored up and use it as ammunition in war with your partner.

For example, Zoey might have said, “Mandy, you didn’t clean the dishes? This is just like that time when you told me that you were going to fill the car up with gas, but you didn’t do it, so I did it myself!”

Mandy might reply by saying, “Yeah well it’s not like you’re perfect! There are so many times when you’ve said you were going to do something, but didn’t.”

When this happens in an argument, it is no longer about coming to a conclusion. Partners who store things up and throw them back at each other are arguing with the intent of putting the other person down. When something annoys or angers you, decide if you want to bring it up in the moment in a gentle way or let it go. It’s not a healthy option to store it up so it can explode later.

In Zoey and Mandy’s example, Zoey might choose to say, “When you don’t do what you say, it makes me feel sad. I start to think that I don’t matter to you.” A phrase like this gives Mandy the opportunity to let Zoey know that she did not intend to make her feel this way. Sharing feelings brings partners closer together. A good, beginner format to use to share feelings in a conflict would be, “When you __________, I feel ____________.”

Absolute statements are statements that use words like “always” or “never.” It is rarely true that someone always or never does something. However, people frequently use these words in arguments.

How do you think Mandy would respond if Zoey said, “You never do what you say you’re going to do!” Most likely, her reply would be defensive. Mandy will be able to think of at least one time that she followed through on her word and use it as ammunition to win the argument.

Using absolute statements contributes to negative cycles of conflict, and it is a harsh start-up. When a relationship conflict has absolute words in it, it will most likely not end well.

Stick with Complaints – Not Criticism

At first thought, complaining and criticism may seem very similar, but they are very different. The difference is in the intent of the statement.

In a relationship conflict with your partner, make sure that the things you are bringing up are complaints, not critiques! Making a complaint is a necessary part in figuring out a problem. After all, you have to be able to state what your concern is.

Here are some more examples of complaints versus criticism.

It is common for couples to get caught up in figuring out who is to blame for an issue, when the reality is that it doesn’t matter. What does matter is that you are dealing with the issue together now.

When couples forget that they are on the same team, blame starts to occur.

The thing about blaming is that it goes back and forth. No one wants to be the one who is at fault, so people will go back-and-forth, swinging insults and pointing fingers until there are two losers, rather than two winners.

Luckily, there is a very easy thing to keep in mind during a relationship conflict to help make sure that you aren’t blaming your partner for any issues: Make statements that start with “I” instead of “You.”

When someone starts his or her sentences with “You,” it implies that the person being spoken to did something. This can be a good thing (“You did an awesome job”) or a bad thing (“You are being too loud”). Either way, starting a sentence with the word “you” is attributing an action to someone.

In an argument, doing this is the same thing as blaming someone.

In order to make statements that don’t use blame, try starting your statements with “I.” Doing this takes ownership of the action and makes it difficult for a blame game to ensue.

Notice the difference between saying “You have the TV too loud” and “I need the TV to be quieter.” Although both sentences are implying the same thing, they have a very different tone. The first sentence is blaming the other person for the action, but the second sentence is taking ownership of the problem.

No blame in that game!

If you want to learn more about how to handle relationship conflict, schedule an appointment with our Denver Couples Counselors at 303-513-8975, X1, or schedule online today: 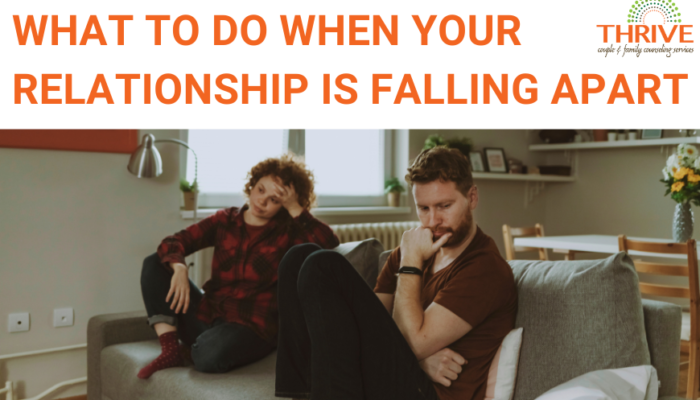 What To Do When Your Relationship Is Falling Apart

Do you ever feel like your relationship is falling apart? Here’s the thing about relationships... 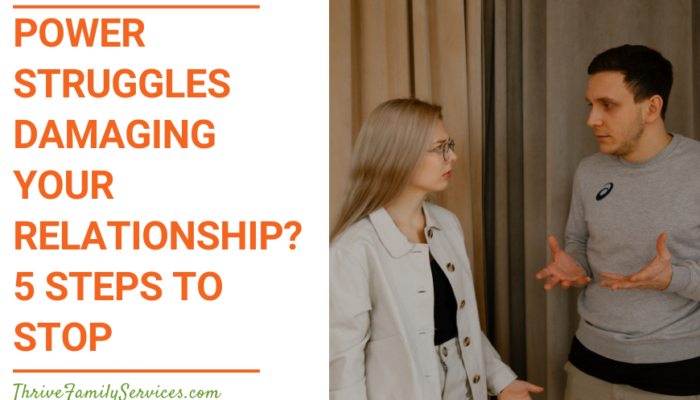 Letting Go of Power Struggles Do you get into power struggles with your partner? Do... 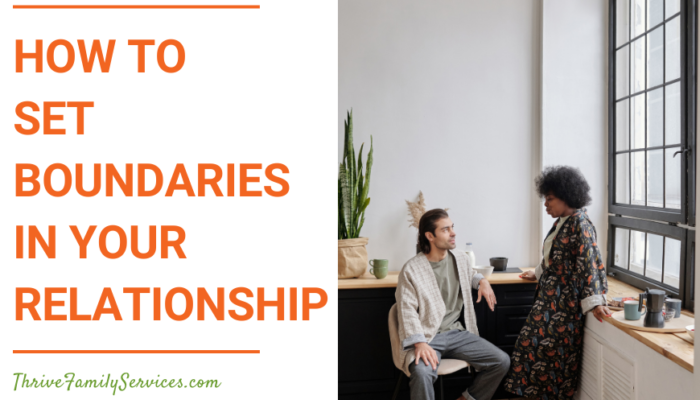 How to Set Boundaries in Your Relationship

Want to Set Boundaries with Love? A Two-Part Post If you struggle with your most...