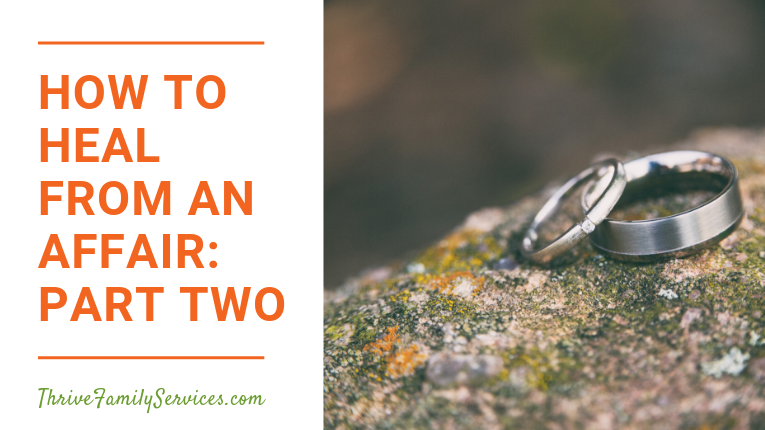 After Will found out about Taylor’s affair, he experienced a range of emotion from rage to shame to sadness. He had a lot of questions that he needed Taylor to answer so that he could determine if he wanted to work on repairing their marriage. He saw Taylor’s remorse for her affair, and after some help from a therapist, he could see that she did want to be with him. Once he had a clear understanding of what had happened and saw Taylor’s willingness and patience to help him heal, he was able to work on forgiving her.

But trusting her again has been an uphill battle that he often struggles with. Every time she’s on her phone late at night or goes on a work trip, feelings of panic starts to arise. He wonders, “Is she going to see that other guy again?” Even though he knows she regrets her actions and he genuinely believes that she wants to be with him, he can’t stop those thoughts and fears from spiraling around in his head.

Taylor hates to see Will hurting and wants to do whatever she can to help the healing process. She knows that she loves Will– her affair was never about an indecisiveness whether or not she wanted to be with him. She knows that her job & the travel it brings escalates Will’s worries, but she doesn’t know how to help. All she knows is that she wants to work with Will to help him start to trust her again.

With this, Will and Taylor are ready to move into the second stage of healing after an affair.

Finding out about a partner’s affair leaves thousands of people feeling overwhelmed with emotions, including betrayal. That loss of trust leaves doubt for many people that their relationship can even be saved after an affair, let alone improved.

When this happens, the couple is ready to start the second phase of healing, known as the Attunement phase.

Attunement involves creating new patterns of interaction that are healthier than what the couple was doing before the discovery of the affair. It also involves the injured partner recognizing their triggers and finding ways to soothe those fear responses. This phase can also involve improved ability to resolve conflict, improved emotional communication, reconnection of friendship, or all of the above.

Not all unhappy relationships lead to an affair. Likewise, not all affairs happen because of unhappy relationships. There are many reasons for an affair, sometimes as mundane as drinking too much and giving into a temptation they normally wouldn’t have, or searching for something they aren’t getting from their partner. There are plenty of partners who have affairs despite strong feelings of love for their current partner.

It’s a common misconception that affairs only happen when someone falls out of love or no longer cares about their partner.

Today’s media tends to romanticize the idea of an affair. We see movies about passionate lovers who are meant to be together, even though one or both of them are married to other people, but this is rarely the case. For the most part, people who have affairs know that they are doing something wrong and care more about the person they are married to than the person they have an extramarital relationship with.

Similar to an addiction, people get caught up in feelings of positive attention, desire, or adrenaline that they can’t stop, even if they know it’s not good.

The second phase of healing from an affair is important because it teaches the couple new ways of interacting that rebuild and increase the missing trust and connection. This is why it’s called the Attunement phase. Partners become attuned to each other’s needs and learn new patterns of interaction that start to stick. While it may not solve all the problems in the relationship that both stemmed from and resulted after the affair, this phase teaches skills to partners that help them recover from broken trust quicker and easier.

This phase is not temporary. Similar to phase one, the more often that the injured partner is exposed to triggers where they are soothed by their spouse, the quicker the sting of the trigger will disappear.

Phase two involves being in tune with what the other partner is feeling and making changes to calm those responses. This is what rebuilds trust.

The Attunement phase also involves discussion about what was unfavorable or unsatisfying about the relationship before the affair and making improvements. A common complaint for couples is poor communication or poor conflict resolution skills. Some other common problems are feelings of disconnection, dissatisfaction with intimacy, or not enough opportunities to bond and have fun together.

The Attunement phase serves the purpose of allowing the couple to learn new ways of interaction that give them the skill set to resolve these problems after the affair.

Many couples choose to turn to therapists to help them accomplish this. Successful completion of phase two has occurred when the injured partner begins to trust their spouse and has lower trauma responses and fears. Furthermore, the end of the attunement phase also involves discussion and resolution of marital dissatisfaction that was present before (or during) the affair.

Perhaps Will and Taylor continue seeing their therapist and learn their major sources of disconnection. They are able to identify how their interactions can improve to increase intimacy, trust, and closeness. It has taken some time, but they are confident that they want to be together. They are also confident that they can be happier now than they ever were before the affair. They have completed the second stage of healing from an affair.

Ready to fine-tune your communication skills and become a better listener? Our Denver couples counselors are ready to help. Call us at 303-513-8975, X1, or schedule online today:  Schedule Appointment

This blog post was brought to you by couples therapy specialist Emma Abel.