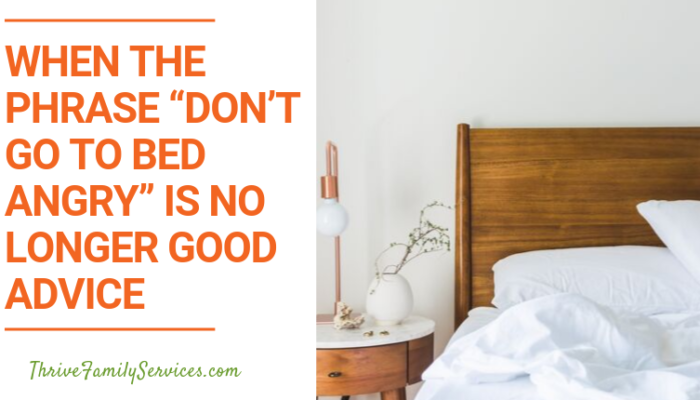 How many times have you heard the advice to “not go to bed angry”? The idea behind this advice is to not let relationship conflicts go unsolved. The fear is that couples who stop talking about issues won’t get them resolved. They fear the issues will just keep coming up or getting pushed down until one person just can’t take it anymore.

In some ways, this is good advice. It is a good idea to solve relationship conflicts when they arise and when it is a good time to find a solution. However, there are times when it is better to push the pause button on relationship conflicts than to continue them. Maybe the conversation is getting too heated. Maybe one person has to get back to their job and can’t engage in the conflict anymore.

There are two other big ways to tell when it is time to end relationship conflicts.

1) When one person is totally checked out of the conversation, it stops being effective.

In times of intensely emotional or stressful communication, our heart rates increase. Sometimes, heart rates get so high that our brain takes over and shuts out whatever is causing us stress.

People who do intense exercise might realize this. When athletes are running and their heart rates get very high, the rest of the world goes quieter and they almost forget they are running. Their brain goes on autopilot.

The same thing can happen in intense relationship conflicts. If someone is talking or yelling at their partner and he or she starts to feel trapped or stressed, their heart rate will skyrocket. At some point, their brain will force them to tune out or ignore the person who is causing the stress.

Have you ever witnessed relationship conflicts where one person feels like they are talking to a brick wall and says, “Are you even listening to me?” and the other person seems to be disengaged? The brain of the person who is acting like the brick wall has probably taken over and shut out the stress. He or she simply won’t hear their partner anymore and their thoughts may wander elsewhere.

When someone attempts to repair a conversation, he or she is doing something attempt to lower the seriousness or the intensity of the conflict. A repair attempt can be anything that gets your partner to feel like you are on his or her side.

During intense conversations, couples might forget that they are trying to resolve the issue as a team. This is especially true with injuries that require more of a healing process rather than a one-time conflict repair. For example, it”s so important to feel like you’re on the same team with injuries such as affairs. Some examples of repair attempts are making the other person laugh, giving a compliment, or apologizing.

Here are two examples of a conflict between a couple.

In this first example, Olivia’s repair attempts are working. She notices how upset her partner is and says things to get him to calm down and show him that she is on his team.

Liam: You say that every time, yet you still forget.

Liam: I love you, too! I am just so worried about someone getting in our house and hurting you if the door is unlocked.

Liam: (laughs) We do really hate that rug…

Liam: You know I get worried about someone robbing us, but you still can’t remember to lock the door. I’m starting to think you don’t care about my feelings.

Olivia: I do care about your feelings! I love you.

Liam: No you don’t. If you loved me, you’d lock the front door!

Liam: Now is not the time for jokes, Olivia! I am really mad at you!

It is easy to see why these two things are big signs that the conversation needs to be paused. If someone is shutting down, continuing the conversation will not get it solved. If someone isn’t recognizing repair attempts, they might just feel like arguing. If someone is getting overly emotional in relationship conflicts (name-calling, throwing objects, or talking over their partner), it is also time to break from the conflict.

Relationship conflicts should serve the purpose of figuring out a solution together.

If something is happening that lets you know that you or your partner are no longer in the mood to work as a team to find the answer, the conflict needs to be ended. It is no longer effective and continuing it could do more damage.

Here are three steps to take to properly end ineffective relationship conflicts that need to be stopped:

1) Tell Your Partner That It’s Time for a Time-Out:

No, this is not like a time-out for children where someone has to go sit in their room. Time-outs in relationships can be very helpful during unsuccessful times of communication.

If you recognize that the conversation isn’t going well, tell your partner that you need a time-out. Time-outs give us time away from the stress and give our heart rates a chance to return to normal. Also, we may not be thinking clearly when a conversation is stressful. Taking a time-out gives both people a chance to think about what’s really important regarding the conversation and come back with clearer heads.

Do not just take a time-out without telling your partner where you are going or how long of a time-out you need. Rather, say something like, “I am feeling very stressed and need to take a break. I care about you, and I don’t like that we’re talking so negatively to one another. I’m going to go take a walk around the neighborhood. Is that okay?”

Remember: both partners are allowed to ask for a time-out and the request has to be honored. If your partner says that he or she needs a time out, respect their decision and back off.

2) Schedule a Time to Resume the Relationship Conflict:

Scheduling a time to come back together to solve relationship conflicts gives both people a chance to decide what they want to say and to be in the right mind set to continue the discussion. Sometimes, depending on the topic, the level of intensity, or if there’s a pending deadline about when a decision must be made, the conversation can be resumed in 10 minutes, 30 minutes, or even an hour. However, more stressful conversations may need to be scheduled for farther in the future.

Try asking something like, “Why don’t we finish this conversation when we both feel calmer? Maybe next weekend we can talk about this again after your big project at work is over. We’ll probably be a lot less stressed then.”

Remember: if you decide to resume in 10 minutes, but you later realize that 10 minutes wasn’t a big enough break, it is important to still go back to your partner at the end of the 10 minutes and let them know that you need to extend the time-out.

After initiating a break and deciding when the topic will resume, do something that makes you feel better and calmer! This can be anything like taking a bath, going to the gym, eating a bowl of ice cream, or watching your favorite movie. You and your partner will both benefit if you can calm yourself down and let the stress go before reuniting. If you and your partner are able to soothe yourselves together, that’s even better! Doing something together to reconnect can be very helpful and soothing.

If you’re experiencing relationship conflicts in your life, our Greenwood Village Couples Counselors can help. Schedule an appointment today! 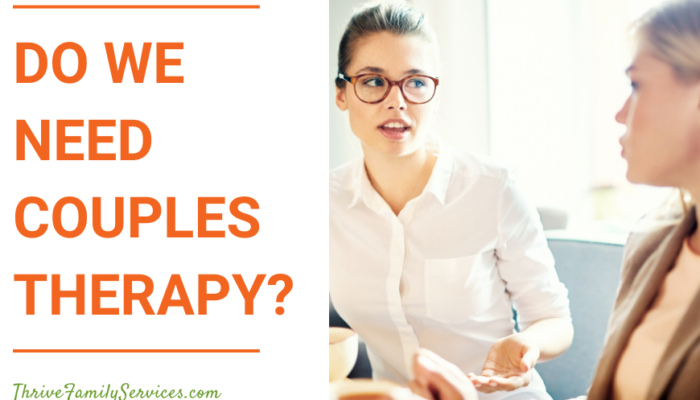 Do We Need Couples Therapy?

How to Know When You Need Couples Therapy (and can't do it on your own)... 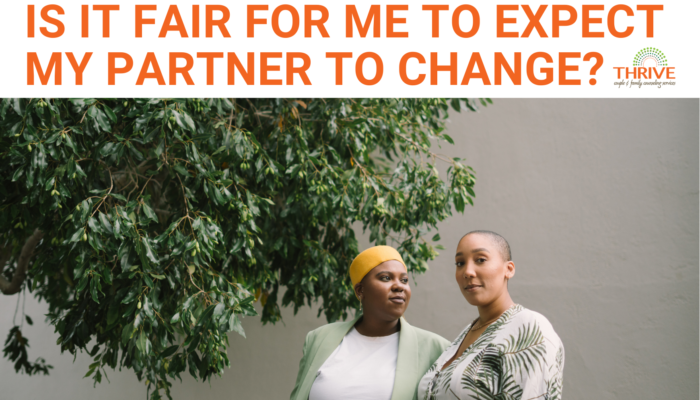 Is It Fair for Me to Expect My Partner to Change?

Have you ever been tempted to ask your partner to change something about themselves? It’s... 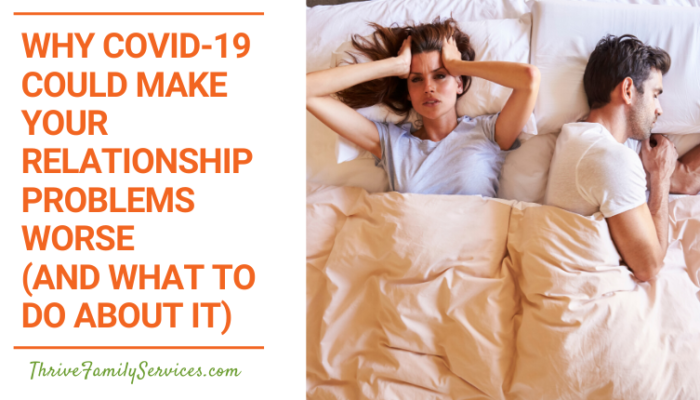 COVID-19, or Coronavirus, has led to a global pandemic that most people would not have...