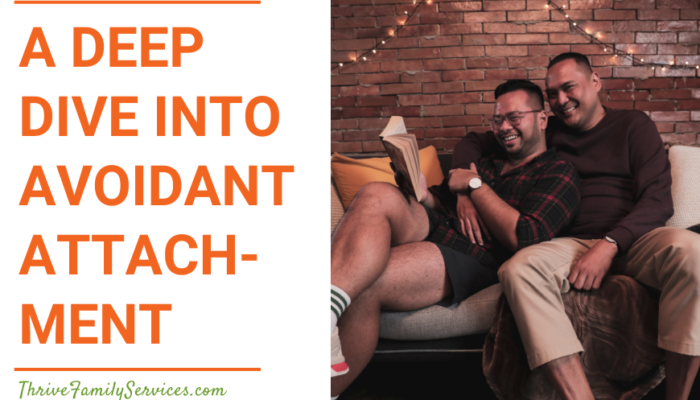 A Deep Dive Into Avoidant Attachment

As a relationship therapist, there is one blatant fact about humanity that shows up with every client that I see: People are wired for connection. In fact, people will do whatever they feel like they need to do in order to ensure that their relationships survive for their own well-being.

From birth, babies need other caregivers for survival, and this fact stays consistent across the lifespan. No matter how old a person is, humans need connections with other people to thrive. Scientific research shows that individuals with at least one secure, connecting caregiver live longer, happier, healthier lives than people who do not.

How does attachment style affect our relationships?

When a person loses emotional closeness and connection with other people for a period of time, their brain actually starts to deteriorate, feelings of fear and anxiety start to escalate, and their body’s stress response goes into overdrive.

Have you ever tried to go to work while in the middle of a fight with your partner? Chances are that it was difficult to stay focused and present at work because the feelings of a loss of security are so intense. This need for human connection is actually one of the reasons why solitary confinement has such awful consequences on the psyche!

Needless to say, our human instincts direct us to do whatever we need to do to make sure that our relationships don’t fall apart.

However, what a person does to maintain their sense of connection depends on their unique relationship history and experiences.

Psychologists John Bowlby and Mary Ainsworth actually used this fact to do research to determine the ways that children learn to connect with their caregivers and how that translates to connection in their adult relationships. In this research, Bowlby and Ainsworth observed four different ways that individuals learn to attach to each other. In their Attachment Theory framework, they labeled these four types as “attachment styles.” The four attachment styles are: secure, anxious, avoidant, and disorganized.

In my work as a relationship therapist, I determine my clients’ attachment styles as a way to categorize how each person has learned to operate in order to maintain their sense of relationship security.

I’ve found that it can be helpful for my clients to make sense of their own patterns of attachment styles, because they can have such a huge effect on a romantic relationship.

So, let’s get to know more about people with an Avoidant Attachment style, and apply Attachment Theory to real life.

How do you know if you have an Avoidant Attachment Style?

Essentially, adults with an avoidant attachment style learned in their development that they can’t rely on others to meet their emotional needs. Similarly, they did not learn how to meet the emotional needs of other people, either. So instead of making space for and going towards their own emotions or the emotions of their partner, they have found ways to “cope” with emotions independently.

Withdrawers are often scared of letting people down, failing, and not being good enough.

As a therapist, when I have a client tell me, “I don’t remember having many emotions as a kid. I don’t think I really needed my parents that much…” then I know pretty quickly that they have an avoidant attachment style. Many withdrawers report that they feel high self-esteem around their “ability” to not rely on other people for emotional support, but they do this by responding to their own emotions with dismissal. They might mistakenly see other people who don’t have an avoidant attachment style as “needing a lot” or “never happy.”

As mentioned earlier, a withdrawer’s behaviors all come from the intention of trying to keep their relationship (and themselves!) preserved by avoiding the emotional territory that they think will be a danger to the relationship. Stereotypical withdrawers tend to close off as soon as a relationship or a conversation gets serious or “too deep.” Instead, they might focus their attention on things that they feel like they can do to distract, numb, or get space.  Chances are, withdrawers are trying to figure out how to “get it right” but feeling like they are failing when the only emotional tactics they’ve learned just seem to be creating more distress in the relationship.

However, because withdrawers have learned tactics that allow them to self-soothe, they often suggest the same tactics to their partner or leave their partner feeling deserted in their own emotional needs – which can lead to more escalation. In turn, this increase in escalation can lead the withdrawer to feel even more of a need to evade the emotion or situation.

Although on the outside, folks with an avoidant attachment style might look stoic, they are experiencing the same amount of anxiety as anyone else about the relationship’s well-being.

After all, it is human nature to care deeply about having secure attachment and connections. Even when the withdrawer is blowing up or jabbing back, they are doing this behavior as a way to get space from the emotion or topic that is making them feel in over their heads because they think it will get them back to a space of feeling calm about the state of their relationship.

It’s important to note that there can be necessary times for anyone to suppress emotions! For example, individuals working in the military, in law enforcement, and in hospitals can only respond to crises effectively if they’re able to push aside their bad feelings. However, this ability to withdraw from emotions has a much different effect on intimate relationships!

How do you develop an Avoidant Attachment Style?

Attachment Theory demonstrated that children with an avoidant attachment learn they cannot rely on others for reassurance or emotional support. In fact, this message can be internalized as early as twelve months old. Babies who feel their parents or caregivers avoid emotional responsiveness learn not to reach out for their parents when they’re upset or need something. In fact, the baby’s brain (and eventually their adult brain) might become so adept at coping with this lesson that it starts dismissing any emotions or needs automatically.

To summarize, a child with an avoidant attachment style learned that there was no use to reach to their caregiver with their emotions, that doing so only created more stress and hurt. So, the child learns to soothe their own emotions and not rely on other people. Deep inside, they feel the same natural longing to want to feel close to their parents, but they internalized the message that this longing is unhelpful, wrong, or weak.

Some withdrawers saw their parent getting more distant whenever he or she expressed an emotion. Other withdrawers had caregivers that indicated that emotions were not tolerable and that they needed to toughen up. Additionally, there are more withdrawers whose emotions made their parents angry and they expected their withdrawer child to be independent.

Here are some examples of people who had relationships that resulted in an avoidant attachment style:

What does it look like to have Avoidant Attachment?

Because avoidant people have learned that emotions threaten attachment security, they are incredibly sensitive to any signs of rising or unpleasant emotions. In general, a withdrawer starts to avoid whenever they recognize an emotion that they don’t know how to manage.

Here are some common examples of cues or triggers for someone with an avoidant attachment:

How Can I Develop A More Secure Attachment Style?

Breaking the generational cycle of avoidant attachment is a hard one to do on your own. After all, if you never learned to pay attention to emotions, then it is very hard to know how to react to anyone’s emotions. However, this is where doing work with a therapist trained in Attachment Theory, especially Emotionally Focused Therapy, can be extremely beneficial. Rather than view Attachment Types as set in stone or pathologically as “Attachment Disorders,” attachment-oriented therapists know that we can work with people who go on to have fulfilling romantic attachment and secure parent-child attachment.

There are some things you can work on to be able to feel a little less trapped by your avoidant attachment style. It’s crucial to be able to see and admit that the “switch” to emotional intimacy has to be turned on – that your history of learning that emotions damage relationships isn’t something that has to be true for all relationships.

To do this, it might be helpful to print off or buy a chart with emotions on it. Start expanding your emotional vocabulary and use it to identify the physical reactions in your body.

Furthermore, tell a trusted person about your avoidant attachment style. Help them understand what happens to you when you feel triggered. Starting to let other people in so they can respond to your emotional needs is one big way to start learning how to respond to the emotional needs of people that are closest to you, too.

If someone you love has learned an avoidant attachment style, it is so important to recognize that the reason why they shut down and push away is that this is how they learned to feel safe in relationships. They do this because you are important, not because they don’t want to be close to you. Making sure your partner feels safe to open up is a huge part of being able to connect with him or her. And remember that your longing to connect with your partner is a normal one! Check out our previous post on Anxious or Insecure Attachment Style. Stay tuned for our next post on Secure Attachment Style.

Call us today at 303-513-8975 to learn more about how understanding your attachment style can help your relationship. Or, schedule an appointment here, using our simple and secure online scheduler.Schedule Appointment 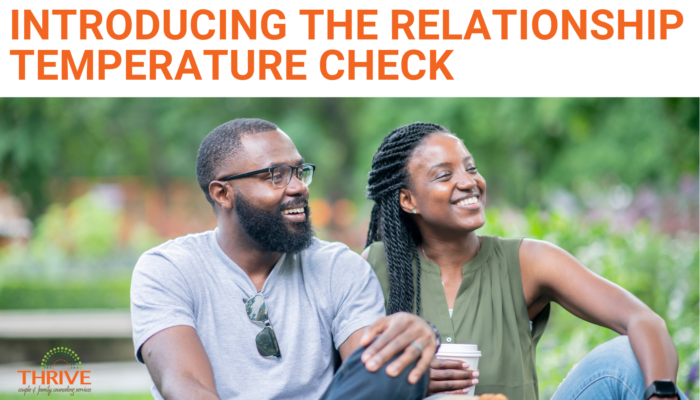 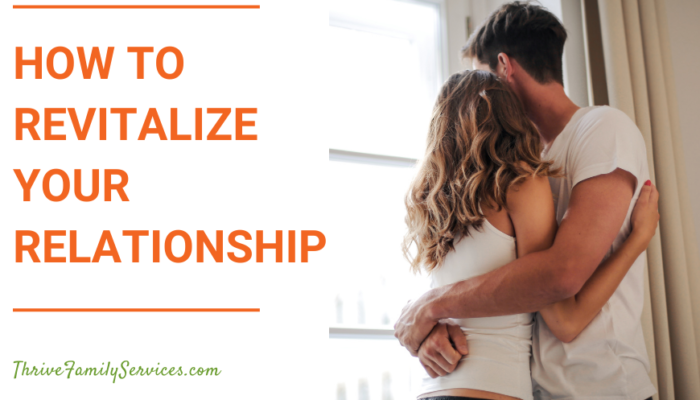 How To Revitalize Your Relationship

How to Revitalize Your Relationship Couples often come to therapy when they are feeling disconnected, distant... 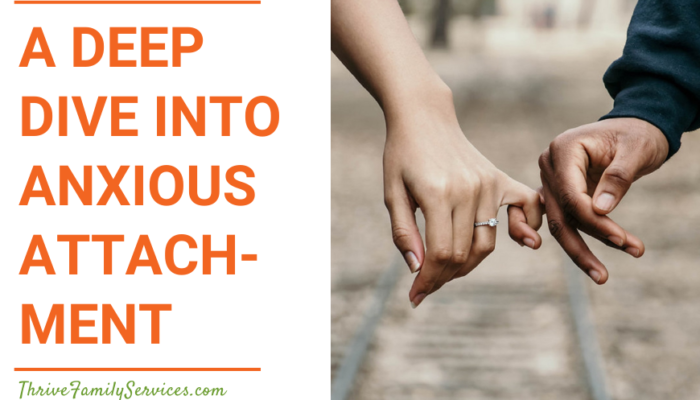 A Deep Dive into Anxious Attachment

A Brief Introduction to Attachment Styles As a relationship therapist, there is one blatant fact...